What was it in Kenton that made this all happen? Because we can go back and forth about this in the adult light of day but in the dark, at night, I simply can’t believe that 3 adults and 7 kids all from the same school district were killed in what amounts to an 11 month period and there wasn’t a cause, there wasn’t something that made it all happen. It wasn’t chance, and it wasn’t coincidence: Kenton is a village of less than 10,000 people. The statistical probability of all of these things happening in the stated time period with the geographical and population limits imposed is astronomical. I think there was a specific cause and I think it had something to do with Snakeland.

I like Snakeland because it makes sense to me. It represents a lot of things: our area’s proud industrial past turned into a big rusty hulk of shit, the brute force and ugly vulgarity of Metal, the Bad Place where the Bad Kids go to do Bad Things. It also represents the Haunted House, the Abandoned Castle, the eerie and empty Mansion on the Hill overshadowing the quaint little village.

Why didn’t they say anything? It doesn’t make sense. Did it seem too crazy to them, as if it wasn’t, couldn’t be happening?

Why didn’t we say anything? Were we really that self-absorbed, that juvenile, that we could just forget? Or somehow not become terrified that we would be next?

Death lived in Kenton, NY for a while. I’m going to place it in Snakeland, and I’m going to find a good reason for it to be there. 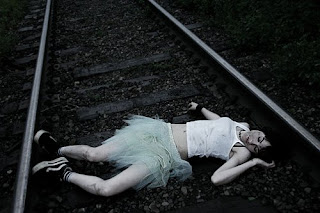 As we go through all of these scenarios, the most important thing to remember about Katie and the night she died is that she was the only one of my dream visitors who had no reason to see this coming, and is, hence, the most sympathetic. Rand Myers and the other Suicides were always in complete control. It is an accepted theory about suicide now that it is exclusively a thinly-veiled act of aggression and hostility and hardly the last-ditch passive/depressive escape hatch it is often portrayed as being. Of course, if the rash of Kenton North suicides were Satanism-related as was popularly expounded (or Snakeland-related, as is Me-expounded) that would be altogether different; however, that can of worms is still to be shaken out onto the sidewalk.

The Janks family, although essentially innocent, probably should’ve seen it coming. Brilliant, socially awkward, disgruntled, probably virginal – Jeremy Janks had all the earmarks of the kid other kids would vote “Most Likely to Become A Terrorist”. For fuck’s sake, he cut his own hair in what I’m sure was a self-consciously “punk” manner (see Travis Bickle and the last half-hour of Taxi Driver for clarification) right before he went on his little killing spree. John and Marge Janks should’ve seen this coming but from the available literature it seems like they were too lost in their own blue-collar Hell to notice too much of what was really going on with Jeremy. Mark Janks I do genuinely feel for, though – like Will Haynes, he was collateral damage and he was way too young and reasonably self-absorbed to see any of this coming.

Anyway, enough – we were talking about Katie Hoehner. Again, just like you and just like me, she started off July 1, 1985 not expecting to be violently murdered that night. I know, I know – who expects to be murdered? But she wasn’t even expecting trouble or experiencing even a mild anxiety, just going somewhere to party where she’d gone a hundred times before, feeling safely ensconced in the bosom of Kenton, where nothing really bad ever happened. You’d stay out all night, run from the cops, smoke some dirt weed, gulp down white crosses and coffee at the Your Host all-night restaurant to stay awake, steal some beers if you could – but as long as you were in Kenton you were gonna be fine. You knew that even if shit got fucked up you were still gonna be okay. Until you weren’t okay, and then you were dead in Snakeland, sprawled across the railroad tracks, murdered.

The railroad tracks – it’s funny, in the “Battle of the Bands” edit I refer to Katie as a “Proj slut” which she really wasn’t but that type of attitude does shed some light on the Kenton cops’ view of her murder. In the local news story one of the cops supposedly commented that Katie was “hanging out with people she shouldn’t have”, the obvious implication being that if she was hanging out with the right people she would still be alive. It’s so cheesily symbolic that if it were a plot device in a movie you would laugh out loud – Girl from the Right Side of the Tracks hangs out with Boys from the Wrong Side of the Tracks, gets murdered for her ignorance and her body is found splayed across Both Sides of the Tracks, between the worlds.

I sit up, still dreaming, my wife asleep at my side. They are arrayed at the foot of our bed, the women sitting, the men standing behind them. They are five in number, a little family – although I remember later that only three of them are actually related. The teenage Girl sits to the left of me, a strawberry blonde in a black t-shirt under a denim vest. She is scrawny and kind of trashy but she has a very pretty, vulnerable smile. She also has a deep gouge in her forehead and a thin red line dug into her throat where she was strangled. Katie says, -You did a pretty good job of explaining the Heads and the Punks. I guess it was pretty silly in retrospect.-

I smile. –Yeah.- I didn’t think Katie Hoehner would be the type to use the word ‘retrospect’ in a sentence. Donna must’ve done right by her.

-But you didn’t get it right about the poem. It didn’t mean any of those things.-

I’m taken aback for a moment, then I realize the opportunity I have here. –What did it mean, Katie. Who were the cats, the rats. What were you trying to tell Donna.-

She squinches up her face. –It wasn’t...I wasn’t trying to tell Donna. It was for...it could’ve been anyone, you know.- Her face falls. She doesn’t speak again.

I press on. –When was it that night, Katie. When did you know that it had gone bad. That it wasn’t going to get better again. That this was the end.-

She looks up at me, her lower lip quivering, and I think for a moment that she is going to cry. But she’s not sad, she’s angry. Katie Hoehner is a lot tougher than I gave her credit for.

-Not until the end. The absolute end. I was a little drunk, a little stoned. I thought it was a joke. Then it turned into not-a-joke. But I was still sure I was going to get out of Snakeland. But then it got worse, and then I knew, and then I didn’t get out.-

I wince. –So it all went down in Snakeland.-

-And he...they...put your body on the railroad tracks.-

I try to lead her but she doesn’t take the bait, just nods again. She looks as if she is about to say something, stops, then speaks again.

-They took my body out, but I never really left Snakeland.-

I don’t ask Katie anything else.