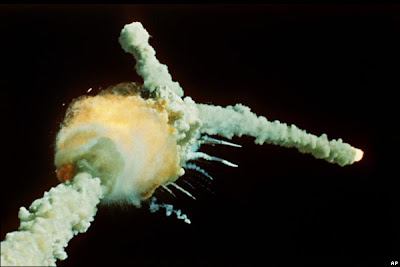 It was much like that for me, and others as well I am sure, with the Challenger disaster. I know I was home sick on January 28, 1986 because I was sitting in my parents’ living room eating soup off a TV tray when the Challenger space shuttle exploded. As the Challenger was the first space mission to include a civilian, school teacher Christa McAuliffe, all the American school kids were in front of televisions at that point as well, from elementary through the high school. And everybody saw it explode.

Everything is fine, it is fine, and then it explodes. And the men on the TV box stop talking until the one says that there has been a major malfunction. And until that point I thought it might be okay. Weird, but okay, like one of those other little rockets that flew off from the main flight path might be the one that the astronauts were really on, and not the shuttle, not the center of that explosion.

I remember standing up, looking closely at the TV then, as if I could look closer and see a time or a place somewhere inside the smoke cloud where the shuttle didn’t explode. In the television feed when you watch it today they close in on the Challenger right before the explosion and then it explodes and then there is a cut back to the other camera which then focuses in on the two small rocket boosters, the only pieces surviving the explosion. And they go off in two separate directions, giving the already twisted smoke path two “horns” that we all became exceedingly familiar with soon after due to the Weekly World News showing the picture again and again on cover after cover with the tagline “SATAN VISIBLE IN CHALLENGER EXPLOSION” with a devil face superimposed over the main smoke cloud. Which was kind of brilliant in its way, if incredibly sick. The Weekly World News definitely had their finger on the pulsebeat of the Satanic zeitgeist.