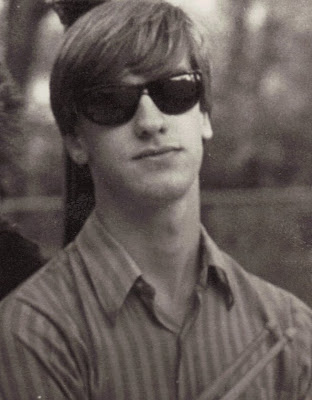 
From 1984 through 1985 I sang for a Hardcore punk band called Suburban Trash. I was 14 years old. We were terrible, even by the loose standards of success set by Hardcore. The other guys in the band (Mark on guitar, Don on bass, a rotating cast of uninterested classic rockers on drums) were only a little bit older than me. For whatever reason, West Coast Hardcore ruled Kenton where we went to school and played our shitty, shitty songs. Black Flag and Dead Kennedys were our twin titans in 1984, and the two compilations that made the biggest marks on us were Let Them Eat Jellybeans (put out on SF label Alternative Tentacles) and the Repo Man soundtrack (heavily featuring California bands including Circle Jerks, Flag, Suicidal Tendencies, and the decidedly non-Hardcore Plugz).

It was really odd that we weren't more into NYHC or the DC bands as both scenes were geographically much closer and in full swing by '84 (and the California bands were in serious decline soon after - Flag and the Circle Jerks embraced the metal jones and DKs just imploded after the Frankenchrist poster debacle), but the West Coast Hardcore scene had a real sense of humor, and that counted for a lot with us. Just look at Green Jelly or even Cannibal Corpse, the death metal band formed by a bunch of guys who lived in the suburbs around Kenton – I think a sense of humor, even a sick one, was required to live in the Rust Belt, to see past the depressing exteriors and into a different place, one where you couldn’t take everything as seriously as it would appear to demand.

But anyway: Suburban Trash. The only recording I have of us is towards the end, and it quickly points up why we were so awful, but also why a lot of the bands that couldn’t play much better than we did became far more popular. By that point we were covering songs like “Everybody Needs Somebody to Love” and “Walking the Dog” because the guitarist had become obsessed with old soul music, “Side by Side” by a band called Doggy Style because the bassist was a Cali-punk purist, and an extended version of the “Peter Gunn” theme with chanted poetry and a microphone feedback solo because I was obsessed with Patti Smith and...well, myself.

Even though the playing on this last recording is rudimentary at best there is something interesting about the big gloppy mess of different styles, but it was that perceived inconsistency that made it impossible for us to develop an audience. Hardcore thrived on consistency and purism, and although this made a lot of the bands impossible to listen to later on, at the time it made them impossibly attractive to us and a lot of other kids. Growth and complexity erode popularity, even at that early age – a good lesson, actually.