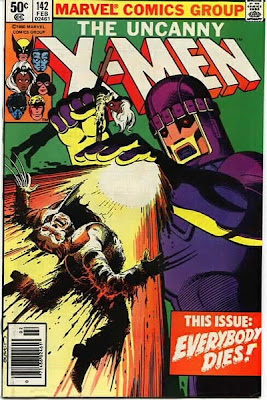 I learned the meaning of the word “elegy” from the title of Issue #138 of The Uncanny X-Men, the comic book in which the funeral of Jean Grey, Phoenix, takes place. October, 1980: this is where the 1980s truly begin. “Elegy” was the first X-Men comic I ever bought – I missed Issue #137 (headed “Phoenix Must Die!” on the cover – I guess they meant it) by a matter of days. #137, the “Death of Phoenix” issue, went on to become worth hundreds of dollars, one of the most valuable modern-age comic books ever – Issue #138 did not. Story of my life. However, “Elegy” began the eternal autumn that haunted Kenton, NY and most especially Kenton North Senior High School, until the end, until the apocalypse that never came, until that one day when we all kept on breathing and shouldn’t have, couldn’t have.

So, “Elegy”: black leaves blowing across its splash page, Scott Summers’ black thoughts blowing across the other 31 – “This...is pain beyond pain. I never knew a body could hurt so much and still function. I’m not sure I want to call this ‘living’.” We were kids reading a superhero comic. Biff. Pow. Bam. It’s Clobberin’ Time. If X-Men #137 ripped something open in our lives and “Elegy” is what crawled in, X-Men #142, the conclusion of the “Days of Future Past” storyline, is that great beast matured and now slouching toward Babylon to be born. They didn’t even need to give us the actual comic book, the cover was sufficient: a huge mutant-killing Sentinel robot holds Storm in his right hand with a big spear in her back and uses his left hand to incinerate an airborne Wolverine. The tagline? “This Issue: Everybody Dies!”

Except, if you read X-Men #142 (and I did, literally hundreds of times) you found out that really, nobody dies. Or they did, but it was in the future – 2013 to be exact. That totally super-futuristic time, the year 2013. Storm gets speared in silhouette, Colossus gets killed offstage, but Wolverine gets the flesh burned off his adamantium bones even more graphically than on the cover. That was pretty insane. That was February 1981.