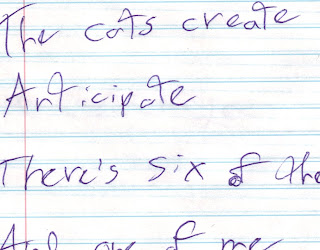 We used to buy weed and sometimes get beers from this guy in Kenton that for the sake of anonymity I’ll call Our Lady of the Flowers (we did not call him that at the time - although we were pretty well-read, no one was reading Genet in high school) who lived off Social Security Disability and SSI payments because he was out of his goddamned mind. He was in his late twenties - a full-time transvestite, full-time heterosexual, big bearded fellow in what was usually a flower-print sundress who gobbled drugs and for some reason took a shine to us.

As did his girlfriend, a tiny little thing named Donna Tremont, who attempted to keep his life as clean and orderly as possible. Our Lady never left the little house they kept on Colver Boulevard due to some intense agoraphobia variation so Donna pretty much did all the working and shopping and had all the human contact for the both of them; due to this Donna remained a respected member of society to those who had never met Our Lady and, besides us, those who had met him were few and far between.

So why did Our Lady of the Flowers allow us into his creepy, creepy world where almost no one else was allowed? Common interests, mostly. Calvin met him first, I got along with him the quickest, but Our Lady always had the most in common with Martin: they were both World War II obsessives into railroad memorabilia, the Butthole Surfers and the unintentional humor inherent in 1980s sex toy catalogs (Our Lady seemed to be on every perv-list in existence and received a sheaf of them daily).

Our Lady spent a lot of time on the phone and always taped every phone call – the prank ones he made for fun he would play us occasionally, each with a strange, lonely logic all its own. Various art projects filled the cluttered corners of Our Lady and Donna’s small Colonial: the Insect of Prague (an Infant of Prague plastic statuette with a mantis head and wings grafted on) looked over all who entered from a shelf in the front room, and a series of photos Our Lady did with Martin in the middle of the night once, breakdancing at a local mausoleum (“Breakin’ 2: Necrotic Boogaloo”), lined the cramped stairway to the second floor. Our Lady was a great artist and a cool guy but there would always be times when the mental illness would take over his basic personality and then bad things would happen.

No one could ever use the bathroom on the first floor because it was too close to the basement, and the basement was where all the grow-lights and crops were kept. If someone did use it, or accidentally edged too close to the back of the house, Our Lady would start screaming at the top of his lungs. It was times like that when you just collected up your weed and beers, if he had given you any, and cleared out of there.

As fascinating an individual as Our Lady of the Flowers was, I really only told you about him to tell you about Donna. As I said, Donna was always very sweet to us and would occasionally make us food at Our Lady’s request. Donna was pretty smart and worked as a medical biller during the day at Kenton Mercy Hospital, and at night she tutored kids from Kenton North and Kenton South High Schools in their homes (of course Our Lady would never allow any strange students into their place). One of those students, unbeknownst to any of us, was Katie Hoehner.

We must’ve been talking about her murder at Our Lady’s one day because Donna turned pale and immediately went upstairs and we were afraid that we said something bad and Our Lady just shrugged his shoulders and quickly explained the connection between the two of them - by that time Donna had returned to the first floor and handed Our Lady a crumpled piece of legal-size yellow paper. She sat down again, silent, face set and determined. Our Lady looked at the paper, said “Oh” and passed it around. Martin was the first to read it – he did so, lowered his arm and quietly whispered, “What in the fuck is this?”

Our Lady explained while Donna sat silently, unmoved. Soon after Katie had been murdered, Donna had a dream about her. She was in her typical Head uniform (denim vest, black concert t-shirt, tight stone-washed jeans, strappy black boots) but her eyes were silvery scratches, like when someone would scrape something out on a Polaroid or a piece of movie film. She walked along a concrete wall in a place that wasn’t Snakeland, but was kind of industrial like Snakeland. She started talking to Donna and this is what she said:

There’s six of them

And one of me

But they all die

Then I am free

Cats and rats have heart attacks

And they all die

And we all die

And they all live

And we all live

But snakes don’t die, they multiply

And shed their skins

And then dream-Katie waved to Donna and jumped off the wall and disappeared. And then Donna woke up and immediately wrote it all down.