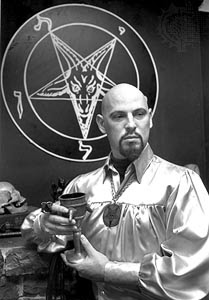 I guess it’s time to start talking about Satan seriously, but honestly it’s really, really hard to take Him/It seriously after all that stuff went down in the 1980s. Take this graffiti for instance, found in the Kenton North boys’ bathroom back in 1985:

So, what do you think? Was this some kid who was really into Home Economics, hailing his new favorite fabric? A different kid alerting us to the rise of some new band, ready to take their rightful place next to Suede and the Velvet Underground? Nah, it was probably exactly what it seemed to be: some retard into Satan who couldn’t even spell His name right. Are these the kind of followers the Dark Lord wanted? Really? Of course, Calvin immediately doctored it with a Sharpie:

Goddammit, that’s still funny to me. Something else I found funny (funny odd, not funny ha ha) was that anyone could believe that something mass produced and available at your local Waldenbooks like, say, Anton LaVey’s Satanic Bible, could possibly hold any actual supernatural power. It seems akin to thinking that Parker Brothers’ Ouija boards could actually contact the dead, as if there could be something special imbued in them on the assembly lines where they were put together by minimum wage slaves to be sold at Toys R Us. Although interesting philosophically and sociologically, the Satanic Bible held no more power as an artifact than If Life Is A Bowl of Cherries, Why Am I Always In the Pits by Erma Bombeck, which I think actually was published by the same company, Avon Books.

Now, this is not to say that the reactions to the artifact, powerless as it might have been, might not have been sociopathic and evil in their own way. Similar to the way Richard Ramirez got some pretty fucked-up ideas from an AC/DC album, it’s not impossible that some of the denizens of Snakeland might have gotten some pretty fucked-up ideas from the Satanic Bible, even though without the implied consent of the Dark Lord it could really have been called the Libertine Bible with a little ritual magic thrown in for variety. The passage titles, referencing “Satanic Sex” (which, oddly enough, does not include any sex that is non-consensual), “Human Sacrifice” (primarily taking the symbolic form of an orgasm, which is pretty standard ritual magic) and “Satanic Ritual” (again, not invoking anything more esoteric than the cup, the rod, the dagger, etc.) are actually a lot more damning than the text proper, if anyone ever actually got around to reading it.

The part of the Satanic Bible that got read the most would’ve been the endpapers, with the strange, inky stamp of “YANKEE ROSE” upon them. Now, to any child of the 1980s “Yankee Rose” was a crummy David Lee Roth single that was way more successful than it deserved to be, with lyrics like “All you back room boys salute when her flag unfurls” – Jesus Christ. Either way it makes no difference to our discussion as DLR’s song came out in late 1986, way too late to influence Jeremy Janks or Katie Hoehner’s murderer or murderers.

No, Anton LaVey’s “Yankee Rose” was something much darker – a 1920s show tune that LaVey used to close his nightclub act back in the day, published by that noted Satanist, Irving Berlin. He recorded it as part of a medley on his Satan Takes a Holiday album – I shit you not. It was LaVey’s version of “I’m So Glad We Had This Time Together” or that sappy saxophone instrumental that closes Saturday Night Live. The guy was a showbiz cheeseball, top to bottom – he wasn’t close “friends” with Jayne Mansfield and Sammy Davis Jr. for nothing. He even had his own closing tune, and it played him out of his own “Bible” for the 15 minute intermission between shows. Smoke ‘em if you got ‘em.