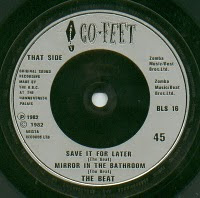 When we weren’t debating the conflicting themes running throughout Generation X albums, we were debating the sexual undercurrents running throughout pop music as a whole. As I have mentioned before, if we weren’t thinking about rock records we were most probably thinking about fucking, and discussing the combination of the two was a natural end. It is important as we break into this next bit that the reader keeps in mind the sociological difference between 1985 and 2011 – in a lot of ways you could divide it between eras BC and AC – Before and After Compton.

In 1985, Prince writing an album track like “Darling Nikki” with a line about “masturbating with a magazine” was so threatening that Tipper Gore formed the PMRC because of it and eventually got that lovely “Parent Advisory/Explicit Lyrics” box slapped on there. From here a natural progression leads us to 2 Live Crew, Too Short, Schoolly D and a bunch of other proto-gangsta rappers but nothing else had the seismic effect on the culture as a whole of NWA’s Straight Out of Compton LP. After Compton charted at Number 1 in 1989 with absolutely no radio play and incendiary tracks like “Fuck Tha Police”, “Gangsta, Gangsta” and the heartwarming “Dopeman” remix (“I’ll slap you upside the head with 9 inches of limp dick!”) there was a definite sense that everything had changed. However, in 1989 Compton was still just a segment of the whole and not an encapsulation of the entirety of commercial hip-hop the way it often feels today. By 2010 Lil Wayne, one of the most mainstream rappers, made it to the singles chart with “Gonorrhea” which featured such lovelies as “we some asshole niggas / call us diarrhea”. Uh huh. So it’s become apparent that things have changed somewhat over time.

But back in ’85 the mysteries of sex and love were relatively intact, for good or ill, at least in pop music. D-Man was always on about whether “Love Missle F1-11” by Sigue Sigue Sputnik was about sex or drugs (it was the “Shoot it up!” chorus that confused things for him), I was obsessed with the idea that “Crimson and Clover” was about sadomasochism (for reasons that have been lost to history – the words don’t support the idea whatsoever), Griffin endlessly puzzled over the lyrics to T.Rex songs as if they were arcane instructions on how to find the clitoris and we were all enraptured by “Save It For Later” by the English Beat to an unhealthy degree.

The rest of the song was pretty inconsequential, to us at least, but there were two lines in there that seemed pretty life changing to our teenaged ears. The couplet

“Just hold my hand while I come

To a decision on it”

was the one that struck all of us in-between the eyes. Even a cursory listen to the song reveals that the use of the word “come” in there is part of the larger thought, and even if the loooooong pause was put in by the Beat for carnally-related reasons it’s only as a smutty joke that deflates any censorship with the end of the line. But you couldn’t tell that to us. It was as if “...to a decision on it” didn’t even exist – no one ever bothered to sing anything but “mumble mumble mumble” along with that part if they sang at all. But if we were playing “Save It For Later” at a party, you could hear “JUST HOLD MY HAND WHILE I COME” for miles around.

What was it about that line? Far dirtier ones existed in the music we listened to, even in 1985. There was an odd sweetness to this one, though – no matter what the girl in the song was doing to the singer (and god knows we debated that for hours, too – was she giving him head, was it a rosy palm situation, was the singer – heaven forbid –roughing up the suspect while his girlfriend watched), he wanted her to hold his hand while he came. As requests go, it’s pretty profound. It’s not the complete innocence of the Beatles’ “I Wanna Hold Your Hand” but it perfectly captured the strange mix of romantic longing that we were barely able to acknowledge at that point with the sexual aching that permeated our daily lives. We knew the word “Just” was part of the key, but further than that we weren’t able to explain. Just hold my hand while I come, but please don’t ask me why.