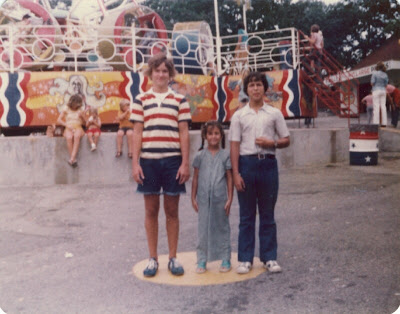 
Aside from the aforementioned basement, my favorite place to hang out in Towaphna was on the roof of my parents' house. It was pretty amazing how far you could see on a clear day. Facing Kenton, I could see all the way across the I-23 and the cemetery and over the treeline could discern the highest points in Kenton: the uppermost floors of the two facing mansions on the opposite corners of Delway and Kenton Avenues, the spire of the United Methodist church, and the decrepit grain elevators of Snakeland. I couldn't discern the "AGWAY" painted on the individual silos but it was obvious it was Snakeland nonetheless, casting its long ugly shadow over the people of the small village.

If I pointed myself in the opposite direction, towards Towaphna, I could see the railroad and beyond that the staid businesses that took the place of the three greatest achievements in Towaphna history: the I-23 Drive-In, the Tail of the Whale Car Wash and Fun ‘n’ Games Park. Odd, now, to think that all of this could exist in an area no bigger than a medium-sized business park (and was replaced in the late 1980s by a medium-sized business park) but no matter: it did exist, and before it was pulled down into the whirlpool of reconstruction that began at the dawn of the 1980s it was the center of the Towaphna teenage universe.

Taken individually, the I-23 Drive-In was just a regular old drive-in movie that was within walking distance from my house. You could actually see the movie from the I-23 and I remember driving by and watching 3 seconds of Ernest Borgnine’s face when I was a little kid. I was always excited about becoming old enough to ride over there on my bike and watch a movie for free but when you have to be home when the streetlights come on it kind of stops you before you start.

The Tail of the Whale was a very simple idea – take your average drive-thru car wash and surround it with a huge fiberglass sculpture of a blue whale, thereby turning your run-of-the-mill trip through the car wash into an intense, Jonah-like trip through the innards of some beached and smiling Leviathan. In retrospect, it’s pretty goddamn outlandish and definitely one of those things that just reeked of 70s logic. I remember when I touched the side of the whale being hopelessly disappointed that it felt like a concrete wall, not soft like skin and flesh like I had imagined.

Fun ‘n’ Games Park was a smaller version of a regular amusement part, with a correspondingly smaller roller coaster (the locally made Wild Mouse) and smaller ferris wheel. Otherwise it was just a version of the little carnivals that still travel around everywhere during the warmer months – unwinnable midway games, omnipresent kiosks selling deep-fried anything, frighteningly un-frightening Haunted Houses and endless variations on the basic “Teacup”-model ride.

By 1979 they pulled out the screen and the speaker poles of the I-23 and in 1980 they tore out all of Fun ‘n’ Games except for the concrete slabs that lay under the miniature golf course (more about this later). By 1982 the car wash was gone too, and then it was all over. Adulthood and mediocrity ensued. But still, it was one of those few things that actually made me want to be a teenager in the 1970s.

Imagine it; I do. Barracudas and Gremlins, bright orange and lime green, passing through the Whale from stem to stern, passengers high as fuck, laughing hysterically as the trip from mouth to asshole was completed, just like in some acid-fuelled Health class digestive system movie. Those same ‘Cudas and Gremlins, blasting Kiss and the Runaways, lined up before the huge blank screen of the I-23, waiting on the night. In the meantime, as dusk descends, last trips up on the Fun ‘n’ Games ferris wheel, feathered hair blowing in the twilight wind, carless kids making out in the shadows under the Wild Mouse, dirtbags blowing chunks into the mouths of garbage cans shaped like clown heads. A strange paradise, but nearly.