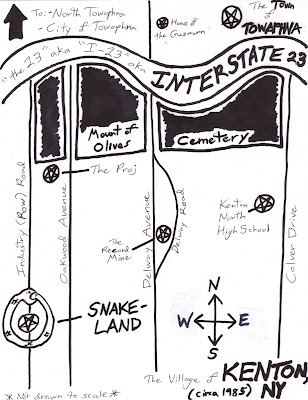 The Towaphna area is certainly not big enough to necessitate dividing it into three separate sections, and the difference between the three (the Town being slightly more suburban than the City; North Towaphna skewing more blue-collar than the Town) would certainly not be detectable to an outsider in the 10 minutes it would take to drive through all of them. However, for whatever reason - financial, political, traditional - Towaphna was split into three, and those of us that were lucky enough to grow up in the Town were sent to Kenton North.

Growing up in Towaphna was weird in that there were two very large boundaries separating the Town and Kenton that took up most of the 4 miles between - Interstate 23, or I-23, or "the 23" (as in "You could just take the 23 to get to Gusmann's house") was the closest of these and was always audible in the background on any given day if you listened for it. At night it was cool, though - the constant roar of traffic turned into a quiet, rhythmic breathing interrupted only by the distant sound of the train whistle out past Industry Row, just perfect for getting to sleep on late summer nights.

The other boundary was the Mount of Olives Cemetery, which stretched all the way from Colver across Delway and Oakwood to Industry Row, a huge swath of green and grave.

Past all this (about 3 miles of it) lay the Village of Kenton, the promised land of Teenage Milk and Honey: record stores and pretty girls. Not only did Kenton contain the Record Mine, one of the all-time champion used record stores, but had 4 others within biking distance: to the south, Home of the Hits (located in the bottom flat of an old Victorian on the traditionally bohemian part of Oakwood Avenue, featuring all the best indie rock records and all the most garish Hardcore t-shirts); to the east, Record Theatre (a solid local chain, still in existence to this day); to the northeast, the Record Exchange (where the guy would actually give you real cash money for records, which financed many a party); and to the north, in the wilds of North Towaphna, was Two Minutes to Midnight (where you could find awesome underpriced records in the Used bins because the proprietors were so fixated on Heavy Metal that old soul and rockabilly gems would pass right through there without either of them the wiser).

Similarly speaking, most of the girls in Towaphna were Heads (probably for the lack of good record stores) so upon arriving in Kenton it just seemed like heaven had descended onto the earth in the form of blonde-haired, black-wearing, Violent Femmes fans. Some of them even attended Catholic school, and wore Catholic school uniforms. It still amazes me that I didn't just spontaneously combust in a concentrated burst of flaming hormones when I crossed the village line.

Another great thing about Kenton was that it was much easier to tune in the local college radio station there. Our local was called WBNY, 91.3 FM - left of the dial, in accordance with prophecy. In Kenton, with a little determination you could actually tune it in on pretty much any decent-sized stereo and, supposedly, some guy we knew had a car radio that intermittently picked it up.

In Towaphna, the best place I found to tune it in was in my parents' basement, sitting exactly 7 and 1/2 feet from the receiver with something metal in my hand. Occasionally I would get very lucky and be able to distinguish a song that I was already familiar with.